It’s easy to feel embarrassed and shameful about being overweight. Here’s how to listen to the (good!) guilt and get rid of the shame in your weight loss.

For years, I’ve thought guilt is all bad.

I’ve believed that God is not a God of guilt because He’s a God of grace (which is true! He doles out grace like confetti!).

That guilt is just an unnecessary burden we carry when Christ is offering freedom instead.

Now, I’m changing my perspective a bit. Here’s why. 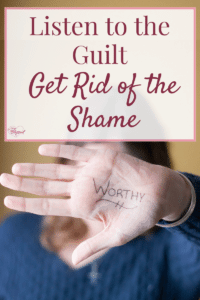 How Guilt Can Be A Good Thing

See, guilt itself is not a bad thing. It’s something that helps to guide our behavior.

Guilt helps us navigate through right and wrong. When we know without a doubt that something we just did was good and godly, guilt doesn’t follow!

On the other hand, when we mess up, it’s our instant companion.

You just binged and ate an entire pizza by yourself?

You just said those angry words to your husband that you know aren’t true?

You spent all day watching Netflix when you had work that really needed to be done?

Sometimes guilt is misplaced, but for the most part, it is really helpful in letting you know, Hey, that thing you just did? That was not a good choice. Next time, choose differently.

It’s just a sensor to let you know that it would be a good idea to change that behavior in the future.

Guilt is focused on the behavior.

Get Rid of the Shame

Sometimes, though, guilt leads us right into shame.

Shame isn’t about guiding your behavior or helping you grow and overcome your mistakes.

It doesn’t tell you, That was a bad choice. Shame tells you, You are a bad person.

It doesn’t focus on the behavior and encourage you to choose differently, it goes after your character and tries to convince you that something about you is fundamentally broken and there is no way to repair it.

Its goal is to break you, discourage you, shake your identity in Christ, and keep you stuck where you are.

When you eat the whole pizza, shame tells you you’re fat. (I talk about listening for God’s voice in emotional eating here)

When you say those angry words to your husband, shame tells you you’re a terrible wife.

When you spend all day watching Netflix, shame tells you you’re lazy.

Do not listen to shame.

When it comes your identity, that is a part of you that cannot be shaken.

You are a child of God and no mistake you make is big enough to change that, so don’t listen to shame for one second!

When you mess up, God uses it for good.

You are never too far gone, and there is always hope for you to grow in the future.

Pay attention to the guilt and let it help you figure out those daily life decisions (along with a lot of prayer!).

But don’t listen to the shame.

Don’t let your mistakes define your character (because they don’t).

Just read this; so glad you wrote it! I definitely needed to read this and understand the difference. It always amazes me that I can see the difference for others, but fall prey to the shame for myself! As much as I know it's from the enemy, I still tend to believe that the words I am hearing about myself are truth, even though I know only One speaks truth at all times! Thanks for the reminder!!

You are so welcome, Diane! I agree. We have such a different perspective on others than we do on ourselves, don't we? I'm so blessed to be part of a church where our pastor speaks out frequently on shame, helping us identify it and fight back with God's grace!

Wow . . . Here’s another God thing! I gained 2# overnight—yesterday I was at my sister’s and had snacks, dinner, a glass of wine and dessert. And then today, I’ve had a continuous meal—and then guilt and shame! And then your article appeared ?! I confess I am obsessed with my weight scale and am terrified to get on it tomorrow morning, hence, I think I will do my best to skip it for a few days while getting back on track.

Prayers for strength are appreciated.

I understand completely what you mean. I had to give up on the scale. I try to only measure how my clothes fit. Finally, after a year, I found a way uto get my stomach to shrink. Let me know if anyone else tries it. I am still trying to lose weight but I am in a size smaller pants